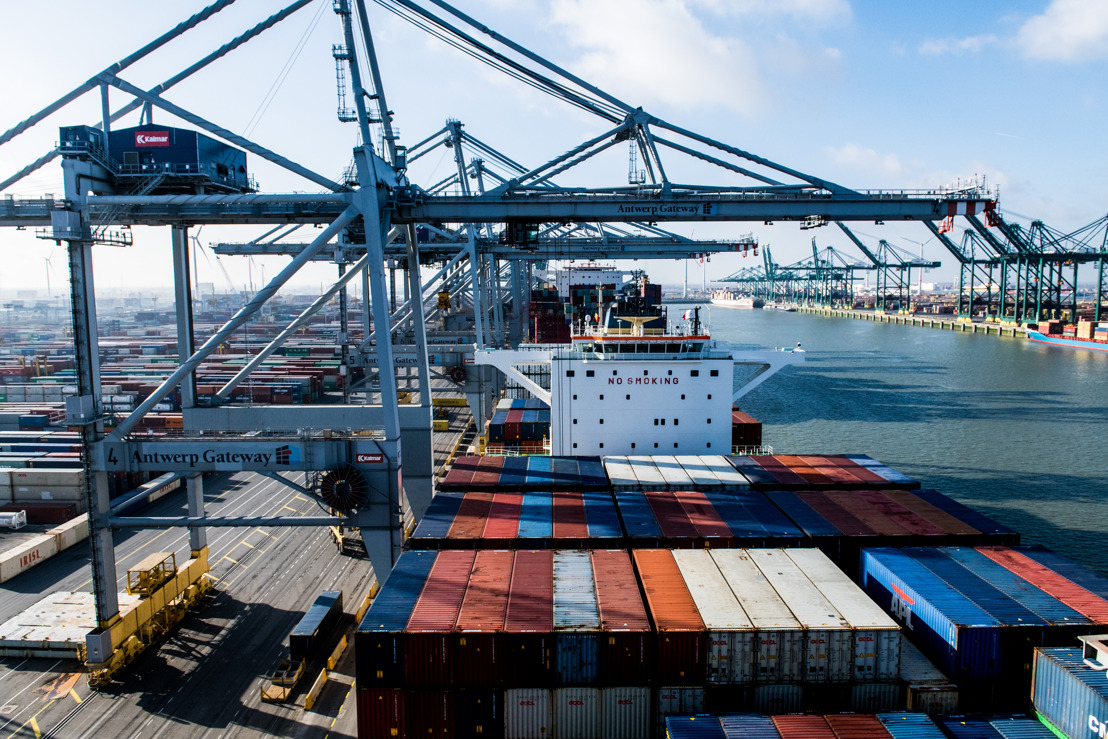 After nine months, the total throughput of Port of Antwerp has decreased by 4.4% compared to last year. Thanks to container handling, which has maintained the status quo and has been picking up since July, the port of Antwerp is able to limit the damage caused by the decline in the throughput of all goods flows. Compared to most other ports in the Hamburg-Le Havre range, the port is holding up very well. Despite the impact of the corona crisis on global production and logistics chains, and the following worldwide drop in demand, the port of Antwerp is holding strong in these very difficult times.

Container traffic continues to pick up

Since July, larger volumes have been recorded in container handling again, after reaching rock bottom in May and June. In September, throughput surpassed 1 million TEU again for the first time since April. In the third quarter, growth occurred mainly in container traffic to the Far East and within Europe. As a result, container traffic remained almost unchanged on an annual basis, with -0.2% in TEU compared to last year. The number of blank sailings has been declining since August. Shipping companies are also organising extra runs outside the regular sailing schedules, which is largely compensating for the effect of the blank sailings.

Both global trade turmoil and the corona crisis continue to have a clearly negative effect on goods flows in the conventional break bulk segment, especially on steel, the main goods group within this segment. After a few better months in June and July, there has been a new drop from August onwards. Conventional throughput of fruit did grow, but these volumes are rather limited. Result: a 20.3% decrease in total break bulk throughput at the end of the third quarter.

The automotive sector also continues to feel the consequences of the crisis. After rising volumes in June and July, these decreased again in August, which is an annual phenomenon. There was no clear recovery in September. The total throughput of new vehicles decreased by 30% and that of second-hand vehicles by 23.7% in 2020 compared to the same period last year.

The throughput of dry bulk fluctuates from one month to the other. Kaolin and scrap have remained stable, but other product groups, such as fertilisers (-4.5%), which represent the largest share of dry bulk volumes, have decreased. The throughput of coal amounted to less than half of that of the same period last year. This resulted in a 15.5% drop in dry bulk throughput in January-September 2020 compared to the same period last year.

Total liquid bulk dropped by 5.7% compared to the first nine months of 2019. Oil derivatives have started to pick up especially on the export side, which suffered greatly as a result of the reduced demand due to the corona crisis and the plunging oil price. The import side has always held up relatively well. The export of chemicals grew by 2.8%, while imports decreased by 11.5%, which resulted in a total decrease of 7.3%.

In the period January-September, 10,241 seagoing vessels called at Antwerp, representing a decrease of 5.3% compared to the same period in 2019. The gross tonnage of these vessels fell by 6.3%.

In order to continue supporting the shipping companies, inland navigation operators and concessionaires at the port of Antwerp in these difficult circumstances, the Port Authority, in consultation with Alfaport Voka and MLSO, has decided to grant a further postponement of payment for domain concessions and for shipping and inland navigation dues.

Jacques Vandermeiren, Port of Antwerp CEO: 'The impact of the standstill of the global supply chain as a result of the corona crisis can still be felt. The prospect of Brexit also leads to uncertainty in the market. Thanks to container traffic picking up, the impact on the total throughput in Antwerp remains limited.  2020 will certainly not be a record year like the past seven years, but thanks to our resilience and container handling we are able to limit the damage.'

Annick De Ridder, Port Alderman: 'Our port is holding up better than most other, comparable ports in the Hamburg-Le Havre range. The port's versatility and resilience are the result of its great diversity of segments, its wide geographical spread, and the presence of the largest integrated chemical cluster in Europe. World-renowned expertise and the commitment of all our men and women in the port platform today ensures that we are 100% operational and open for business - and this is also being picked up internationally.'