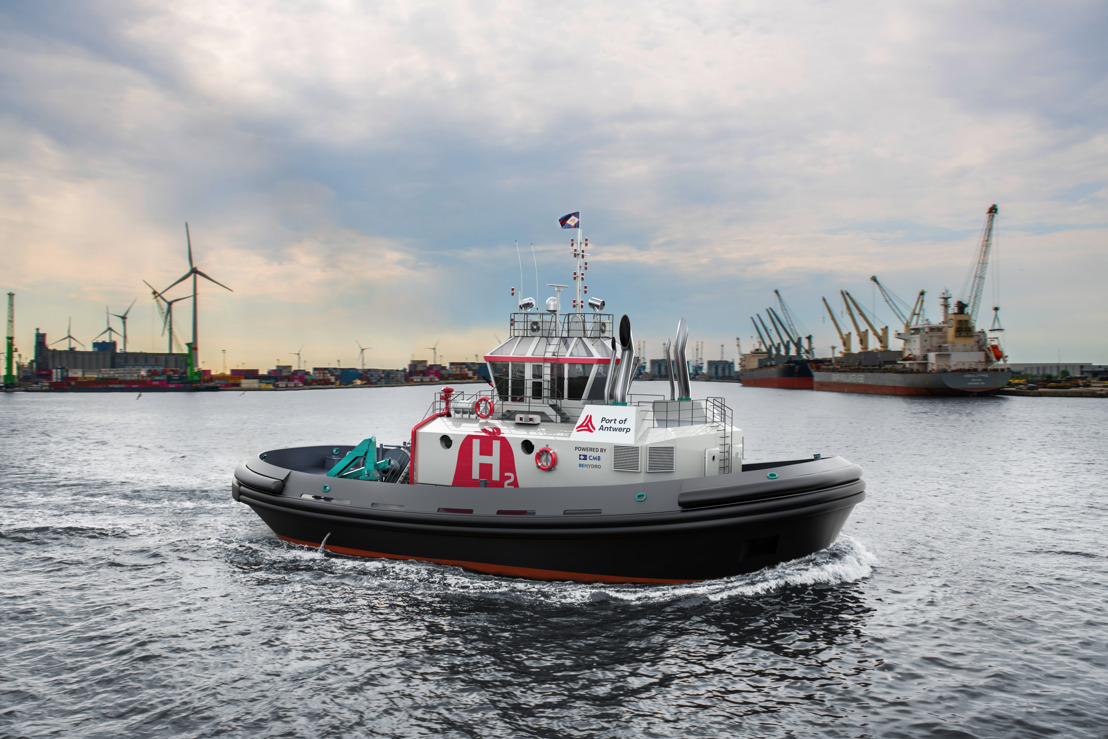 Port of Antwerp has ordered construction of a tug powered by hydrogen, the first in the world. This unique "Hydrotug" is driven by combustion engines that burn hydrogen in combination with diesel. The motors also comply with the very strictest standard, the EU Stage V, making them the lowest-rated for emissions on the market. This ultra-low-emission tug is being built by Compagnie Maritime Belge (CMB), a pioneer in the field of hydrogen power for shipping. With this world first Antwerp is making an important step in the transition to a sustainable, CO2-neutral port. By lending support to this promising technology Port of Antwerp hopes that the shipping industry will follow. The port is systematically pursuing a policy of making its entire fleet eco-friendly by incorporating the most environment-friendly technologies available on the market.

The combination of this dual-fuel technology with a state-of-the-art particle filter and catalyser designed to meet the very highest standards will ensure that the Hydrotug is ultra-low-emission. Combustion of hydrogen does not emit any CO2, and the particle filter combined with the catalyser will result in minimal emissions of NOx and particulates.
​

Construction is due to begin shortly and the Hydrotug is expected to be operational within two years. This innovation is part of an integral greening program of the own fleet, whereby systematic efforts are made to integrate the most environmentally friendly technologies available.
​

Port of Antwerp CEO Jacques Vandermeiren declared: “As an industrial seaport, Antwerp's role in the energy transition should not be underestimated. We are working towards becoming a CO2-neutral port. Together with our partners we are preparing for the future in a constant search for innovative applications and opportunities. With this world first we aim to further prepare the way for alternative fuels such as hydrogen, in order to realise the transition to alternative, renewable sources of energy. At Port of Antwerp we are setting a good example with this significant step towards making our own tugs eco-friendly."
​

Hydrogen, the fuel of the future
​

With the Hydrotug, the Antwerp-based shipping company CMB confirms its international pioneering role in the transition to ships powered by eco-friendly fuel. Last year it already won the Sustainability Award with its "Hydroville" shuttle, a passenger ferry with limited capacity and power that also uses dual-fuel technology. This vessel is now being used for sustainable commuter transport within the port area.
​

Meanwhile CMB has teamed up with the Ghent-based engine builder ABC to set up the BeHydro joint venture with the aim of further developing the technology for medium-speed engines with higher power output. The Hydrotug for its part is the first vessel with output in the 4000 kW class to be powered by hydrogen-diesel dual fuel.
​

"We are convinced of the potential of hydrogen as the key to sustainable shipping and making the energy transition of a reality," says Alexander Saverys, CEO of Compagnie Maritime Belge. "The expertise that we acquire with the Hydrotug will enable us to further develop the use of hydrogen as a ship's fuel."

Port alderman Annick De Ridder concluded: "Hydrogen is one of the keys to an economy and society with minimum impact on the environment. As such it is one of the fuels of the future. With Port of Antwerp we aim to develop its potential to the full, committing ourselves as active pioneers in the hydrogen economy on a European scale. The ecosystem represented by the Antwerp port platform is an ideal testbed for this technology on a large scale. In this way we seek to be a source of inspiration and to set an example for other ports." ​
​